Texture alignment on ramps now finally working
The texture alignment on ramps kept bothering me for weeks now and I finally decided to use a method that does the same as JACK’s UV lock feature. It basically just pulls the texture into the direction you’re moving the vertices to and preserves the original texture shift, while adjusting its scales to fit the new face length.
While this is the best method for texture shift preservation, it will also lead to a certain distortion, when the slope angle is very steep. The pros of that method outweigh this con though.

Compilation issues
Initially I ran into problems when I tried to compile the pipes in the upper example. I realized that this was caused by them having floating point coordinates, so I was able to compile the demo map without any compiling issues in the end, by just rounding all coordinates to integer numbers – AKA snapping them to the grid – using “round 1” during the generation process.
Doing this won’t have any noticable effect on the texture aligns or shifts, which is absolutely brilliant, because having a managable mesh is important when working in any editor. Of course this will also break any mesh with sloped but non-triangle faces. This should be kept in mind when rounding meshes that actually don’t need to be triangulated.

Alternative texture alignment
Anyway, as an alternative I also included the old method I was working on. It can be used in situations, where crossing details on the horizontal texture axis aren’t that bad, but having an upright vertical texture align is relevant for a natural look… or whatever.

Texture alignments on ramps
Another little preview on the current update progress for Map2Curve. I was able to polish the texture alignment on ramps a little further. It’s still not perfect, but this doesn’t matter in all situations.

If you want, take a look for yourself. I zipped all the relevant files for this demo map. You can download it here.
Beware, if you try feeding the included files to the current version of Map2Curve, which is 0.2, you will probably not create something beautiful.

Being able to use uneven heights is a very important aspect, when generating rock formations like these.

Currently I am still working on the next update for Map2Curve. In addition to the path extrusion feature, I want to concentrate on correct texture alignment for sloped surfaces this time, like those on a ramp.

When this works smoothly I will be able to combine it with the path extrusion feature which will make very interesting landscape possible.

Thoughts about architecture overkill due to generated brushwork

One idea suggests itself. With a tool like this it becomes easy to create curved brushwork with a lot of details in just a few minutes. A level of detail which quickly becomes too much for the Goldsource engine, so one has to keep in mind: With great power, comes great responsibility.
The polygone usage of these arcs or ramps is – compared to manual low-res construction methods – significantly higher, which will demand for a very thoughtful and occasional usage in suited situations, where a small amount of curvy architecture has a huge impact on the overall quality of the scene.
In my opinion creativity and discretion are very important resources in good leveldesign, if not the most important.

The next big feature of Map2Curve will be brush-extrusion along a path, which was previously created in Hammer.
Having initial issues with the whole path thing, it works nice now.

The current available method creates brushes, that are simple and managable after generation, while still looking smooth in most situations.

This Canyon was generated from a path and a few brushes, all of which was made in Hammer previously. Generation takes a few seconds and produces easy to manage meshes and correct texture alignments, without using triangles. Another planned feature is also height.

Base Principle of the Path Extrusion

I am currently working on a documentation for Map2Curve. 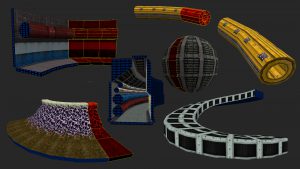 Changelog
v0.2a
1. Added Drag and Drop for map and txt files. When dropping map files,
defaults.txt will always be used for settings if it exists. Otherwise
internal defaults will be used.
2. Added Solid Entity Support. Point Entities are still being ignored
at the moment, but might be considered in a future update.
3. Added Custom Height command “height”, which is being added to each section.
4. Added round coordinates command “round” (0/1).
5. Added “ramp” as an addition to “height”. Usable with linear (1) and
smooth (2) slope.
6. Added Triangulation “tri” (0/1) for 6 sided Brushes only (Cuboids).
Neccessary for ramp generation.
7. Fixed settings file issue.
8. Fixed invalid Brush issue.

Next features will include: 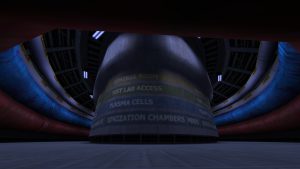 Today I released the current (hopefully) stable version of Map2Curve to what is left of the Half-Life mapping community.

Since this is the first version of the tool, I can’t and won’t guarantee for anything. It will run under Windows only atm and is available as 32 and 64 bit version.

For any further details please check the multiple Readme files that come with the tool.

At the moment the generation process is a bit unhandy, but I am planning to make this easier eventually. I also have some more features in mind, which I will add continuously (assumed I am able to).

The tool can be downloaded from ModDB and Gamebanana.

I am thankful for any bug reports and feature requests. Please send those to my email adress totac at web de.

Hey there boys and girls!

Like I already stated in the About section, this will be my new playground to publish articles and media concerning my current projects or those, in which I am involved.
I hope to be less focused on the webdesign and more on the actual thing.

First thing first: I’ve finished a piece of software I was working on for the past 8 months or so. Something I always wanted to have, a tool that can actually generate and texturize circular shapes for the quake map format. But not any circular shapes. These don’t need to be made of triangles! Yes, that’s right. There are a few downsides of course, but otherwise this is kind of a holy grail, so I am really happy to share it with the remaining mapping community.